What do the invention of watercolor, one-point perspective, and the rubber eraser have to do with the history of science?

And what does any of that have to do with learning to sketch?

Last week, nearly 20 people joined me to explore the answers to these questions. We made a hands-on dash through the history of art and science.  In addition to an illustrated talk that highlighted both artistic and science technology advances through the ages, we explored a wide range of sketching techniques that even non-artists can use. Even the skeptics in the group were sketching by the end (scroll down for details). 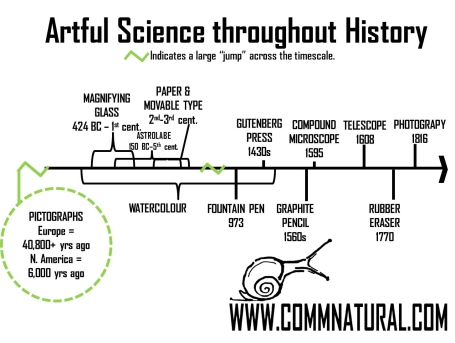 I created the above timeline (by no means exhaustive) to form the foundation for the whole workshop.

As it came together, I was intrigued to see how the advent of major “artistic” technological developments compared to more seemingly scientific ones. Of course, until just a few decades ago, the two were one and the same. Incidentally, one thing particularly struck me regarding the visualization of science. In the books I perused, as early as 1913, photographs were supplanting illustrations.

In the course of researching the material that ultimately formed the illustrated presentation, I discovered a number of books which may interest readers looking for more on the historical synergy of art and science.  I can recommend:

After the talk, and armed with some liquid courage and multimedia sketchbooks (both provided by the host organization), participants dove right into several foundational drawing techniques (all of which are detailed in my Guide to Sketching and Field Journal Basics).

As in the example at right, simple tools and techniques can often provide an accurate and artful rendering of what you are studying. Such an approach can be useful for amateur naturalists and specialists alike.

To my delight, one of the participants proved to be a writer from the local newspaper (to which I contribute an illustrated column). She even produced a succinct article about the workshop.

As a self-proclaimed non-artist herself, she did a great job of articulating just how invigorating it can be to discover that she actually can draw.

“By the end of the evening we had all succeeded in producing pretty decent representations of the objects we had chosen to depict.”

Does it make a difference?

A great many people maintain that they absolutely, positively, do not and cannot draw.

While making the rounds, introducing ourselves to one another, we learned that four participants had considerable previous drawing experience, while two more were interested and had done some practicing. The rest of the class expressed they had no aptitude, and the extent of their past drawing had been sketching maps for directions or diagrams to visualize a building project. Some were teachers, two were translators, several worked for small businesses or nonprofits, a couple were retired, and one was a marine biologist.

And yet, they all had something in common – a desire to draw more often.

You can imagine my delight at their responses to a follow-up survey.* Their comments have been enlightening and encouraging.

This feedback substantiates my personal observations, made over the past decade of leading workshops like this.

When people say they can’t draw, I’ve generally found the principle limiting factor is a lack of exposure to basic techniques.

Considering that the western world didn’t figure out one-point perspective until the Renaissance, there’s no reason to berate yourself over a lack of ability.

In reality, it is much more likely a lack of experience and training that hinders non-artists.

*The follow-up survey is an anonymous online survey I sent by email after the workshop. 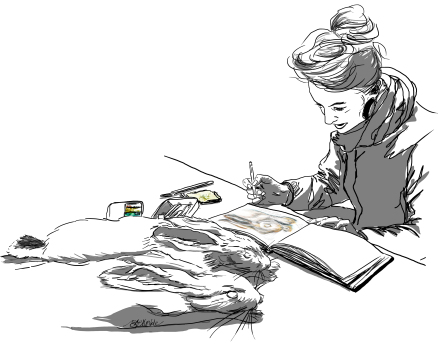