One foggy morning, I found this moth on the back steps of the cabin where I stayed in June (at the UW Research Station in Grand Teton National Park). 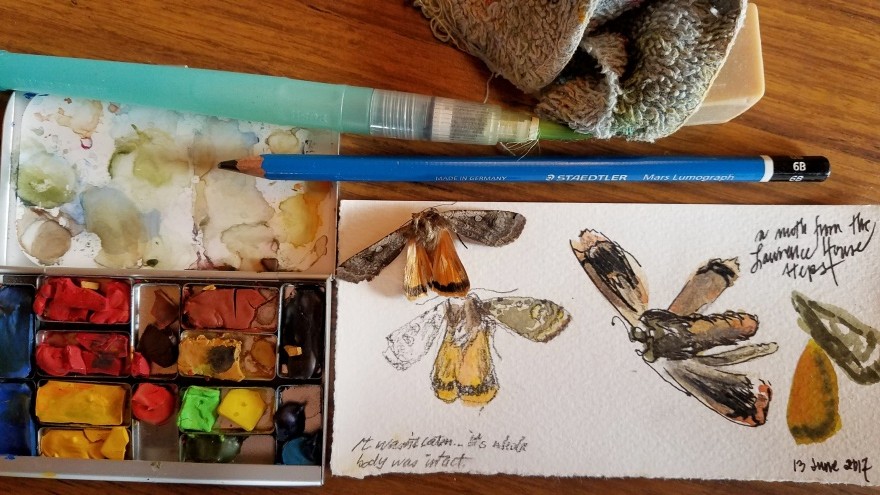 I spent a fair bit of time with this one, like I do with nearly every moth I can get my hands on.

I sketched it from a couple of angles (right to left on the page). Each time, I aimed for increased precision with how I recorded the markings on both front and hind wings. I figured the placement of the spots and bars would be key for identifying it. 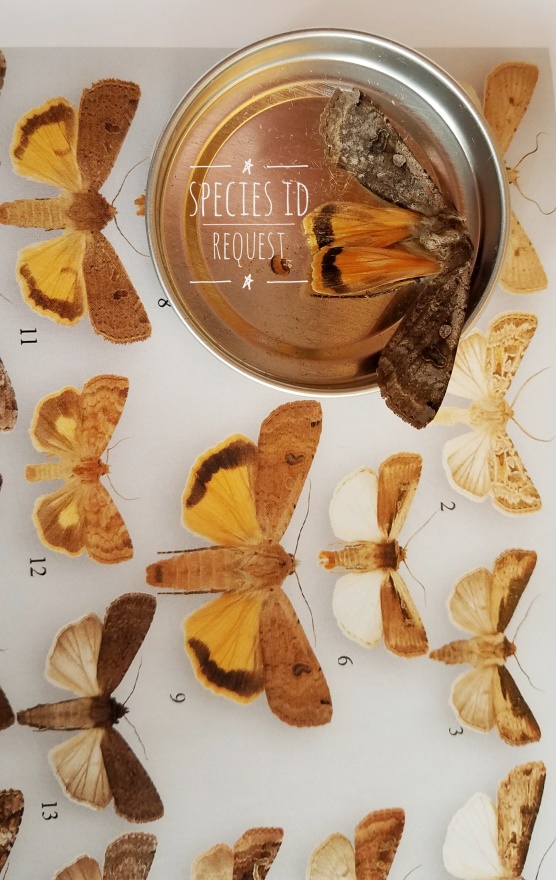 When I looked through the insect ID guides in the research station library, I could only find one on moths: Moths of Western North America by Jerry A. Powell and Paul A. Opler. It’s approximately 500 pages, a hardcover reference, not a field guide. There are 65 pages of color photos (roughly 25% of “each family, subfamily, and larger genus” are depicted). Using only those images, I couldn’t figure out what the moth was. The closest I could get was something in the family Noctuidae.

It’s not like identifying the moth, in and of itself, is significant. However, I wanted to see what I could learn about this moth beyond the obvious – its marvelously furry thorax and its vivid orange hind wings. So, I sent out a plea on Twitter. I started there, because I have had success with crowdsourcing insect ID in the past. 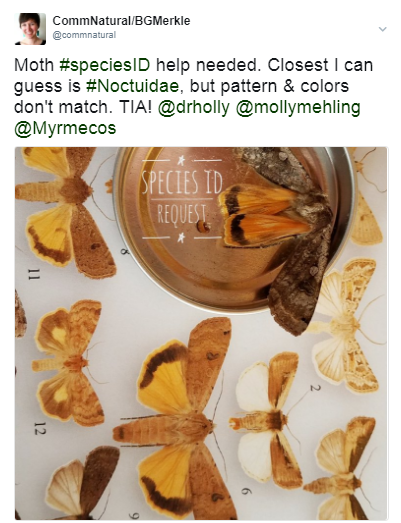 And, despite the early summer snowstorm we were having, and the always limited internet at the research station, it worked! 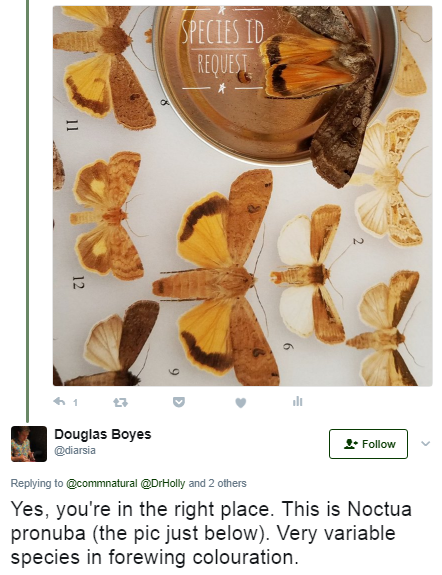 According to Powell and Opler’s book, the moth I found shouldn’t be here.

Noctua pronuba (the “large yellow hindwing”) is from Eurasia. It was accidentally introduced in Nova Scotia in 1979, quickly spread throughout Atlantic Canada, and now is present throughout much of North America. And, in some years, it migrates en masse to marginal parts of its range.

“The adults are nocturnal and fly from mid-June to late-September,” write Powell and Opler. They describe the larvae eating habits (“a wide variety of both weedy and cultivated herbaceous plants and grasses”).

It is, according to another source, one of the most hated of the cutworm species. The University of Idaho extension program has a detailed hand-out describing the life cycle, agricultural issues, etc., related to this moth’s appearance in that state in 2005. It wasn’t, however, until the winter of 2007-2008 that the caterpillar phase of this moth was clearly identified as an agricultural pest, based on a major outbreak in Michigan.

But, they make no special mention of the adults. The adults have a proboscis, so presumably their eating habits are similar to many other nectar-feeding Lepidoptera. 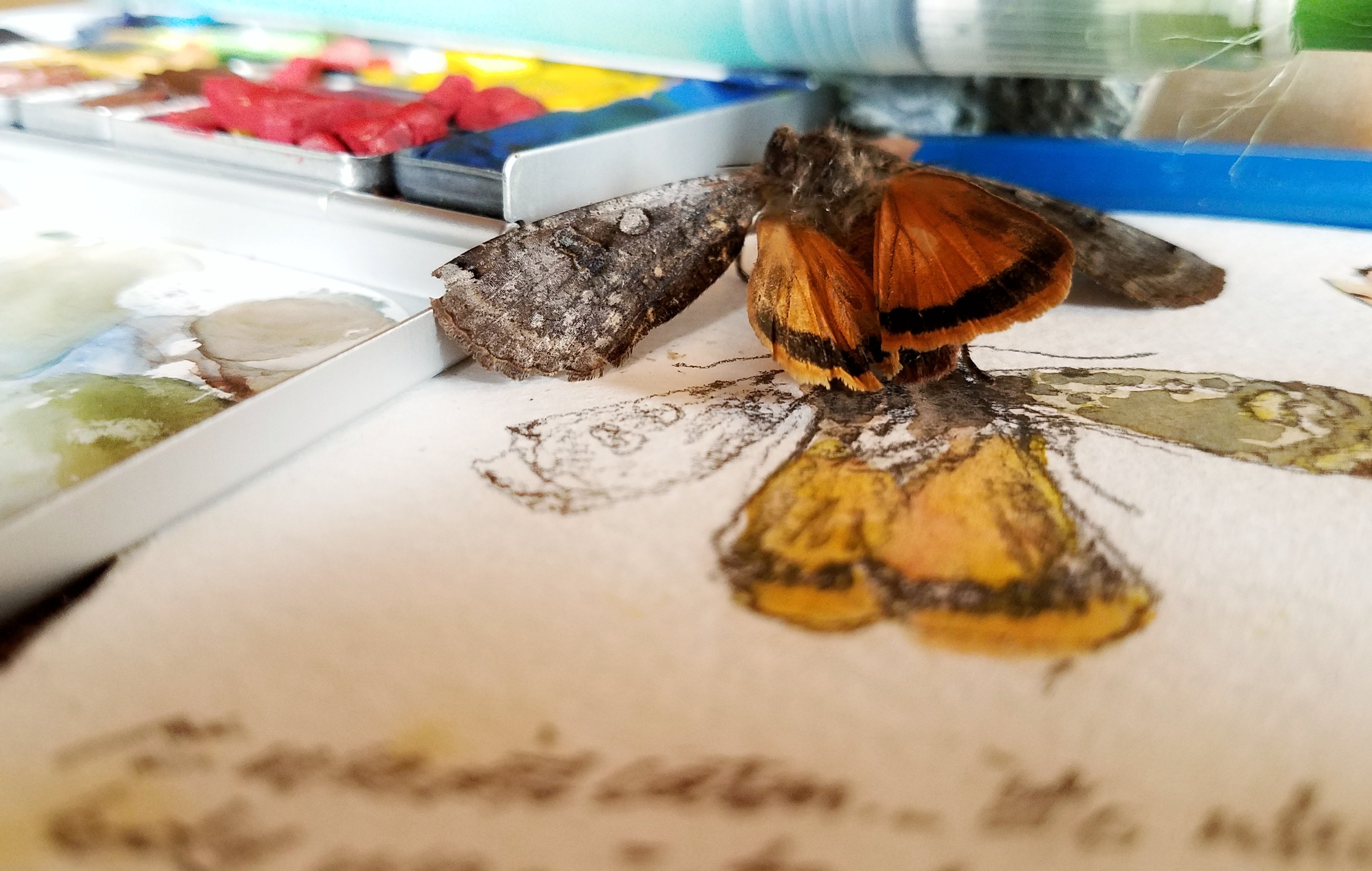 Nearly fully-grown larvae are active (read: eating plants off at their bases!) throughout the winter. The adults emerge in the spring. That means the moth I found spent the past several months exposed to the fierce winter weather that hits this part of Jackson Lake.

Though dead, it was intact. So, I doubt it fell prey to one of the swallows setting up nests in the cabin eaves. The storm we were having when I found it was mild compared to what it endured all winter, but it seems that’s what got it in the end.

My SciArt newsletter ran 2014-2017 and was loaded with tips, inspiration, and resources. You can access the archive here.